A first  sight,  not  a  lot!   Both  involve  tea  and coffee  (generally  with  something  tasty  to accompany it), both involve like-minded spirits meeting up for a good chat (sometimes about books, sometimes not!)  and both, as the name might suggest,  involve books (sometimes read and enjoyed, sometimes not)!  At the book club, members have to read a book – not necessarily one you would have chosen yourself – and be prepared at some point during the course of the morning to talk about it.  At the book swap, if you bring a book to swap, you have to take one back home with you and again, a book which has been chosen and bought by someone else and may not necessarily have been your first choice.

As I am no longer able to attend the book club on a regular basis, the book swap coffee morning, hosted by one of our members, is the next best thing.  At the last book swap hosted by  Michele  in  December,  I  picked  up  “Still  Alice”.   I  hadn’t  heard  of  the book  but  was intrigued  by  the  cover.   Still  Alice is  the  story  of  a  woman  who  develops  early  onset Alzheimers and the impact that this has on her and her family.  I have only been affected peripherally by this disease, friends who have had family members who have suffered from Alzheimers (although not the early onset variety), so I was interested in finding out more, fiction very often being a more palatable form of acquiring information.  The book is the first novel by a neuroscientist who has all the scientific information at her finger tips but is able to put this into layman’s terms and use her knowledge 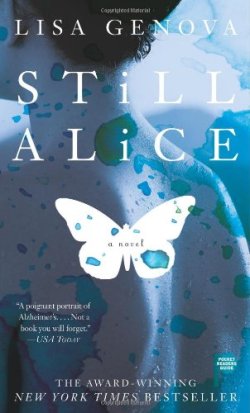 to create a highly sympathetic portrait of a woman, with both a demanding career and family, who slowly but surely succumbs to this silent disease.  Alice, despite her disease, is still Alice but goes from being a highly active, busy, engaged woman to one who becomes quite still, observing and trying to make sense of the world around her.

Still Alice is a fabulous novel and if you are very lucky, you may see it at our next book swap. But just a word:  although we are pleased to be able to share and redistribute books, another member has to house the collection between swaps.  For this reason, we kindly ask you only to bring one book to swap and to ensure that you take one home.

Sister Clubs in the Netherlands