Beautiful blue skies with barely a cloud to be seen, it was the perfect day for the annual IWC cycle ride.  Expertly mapped out by Rina, meticulously researched and led by Hope, our 40km route was to take us the scenic route to Etten-Leur and back.  We cycled past farms producing a variety of typical regional products ranging from cheese to ice cream, asparagus and strawberries, and took in some beautiful countryside on the way, quite literally passing in the footsteps of one of Brabant’s most famous sons, Vincent van Gogh.   This year is the 125th anniversary of his death and our route had been designed with this in mind. 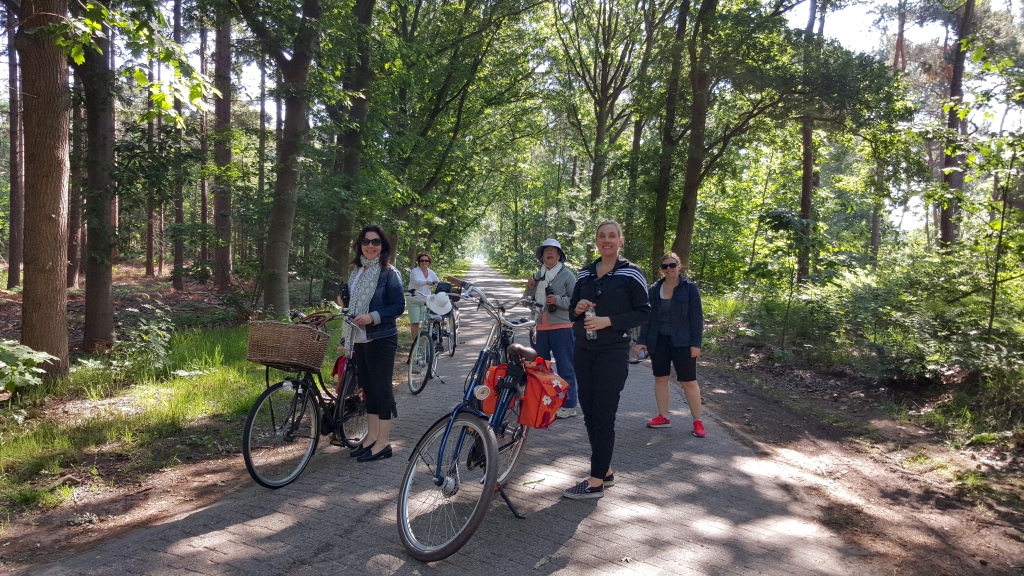 Our first stop was in Princenhage where we cycled to the house once inhabited by Van Gogh’s uncle.  From there, we headed out to Etten-Leur, past the very trees depicted by the man himself, and headed for the church where Vincent’s father was once a minister.  Van Gogh, in need of money, returned to his parental home in Etten-Leur in the early 1880s and opened his first workshop in his father’s parsonage.

Once in Etten-Leur, we were in for a special treat: we were met by Cor Kerstens, a local official keen to practice his English ahead of the imminent arrival of a delegation from Etten-Leur’s twin town in Lithuania and were lucky enough to be given an unscheduled private viewing of the current exhibition being shown in the church, celebrating 125-year anniversary.  In addition to the windows decorated with images from Van Gogh’s life and career, there was an exhibition of busts of Vincent, inspired by the artist’s self-portrait, by a local (Oisterwijk) sculptor, Ien Sluyters.

We were delighted by this impromptu visit and would heartily recommend a visit to this delightful exhibition (www.vangoghkerk.nl) where an audio guide in English is also available.  Outside the church, there was also a fabulous mural, again with images of Van Gogh, his work and letters from which we have learned so much about his life and state of mind.  Next to this, there was also a colourful three-dimensional representation of one of Van Gogh’s last work: “Tree roots and trunks”.

ter a short stop in a local cafe, we got back onto our bikes and headed towards Rijsbergen.  On the way, Hope was delighted to point out some extraordinary sheep to us, from the “Racka”, an ancient breed of sheep which were depicted in Egyptian wall paintings some 8000 years ago.  They are very distinctive due to their twisted, screw-like, horns.

On the last leg of the journey, we made a slight diversion into the woods to visit the site where several Dutch resistance fighters were captured towards the end of the Second World War, in October 1944.  A radio masthad been installed in the forester’s cottage and this was discovered by the Germany occupiers.  The members were then taken to the Mastbos where they were summarily executed.  In the meantime, the forester’s house was razed to the ground, with the forester’s wife and three of his children inside.  However sad, this is a living memorial to the brave souls who perished there and who fought so bravely for the freedom of their country.

We ended our day with a late, but delicious, lunch at a cafe in the market place in Princenhage.

Many thanks to Rina and Hope for all their hard work in putting this very interesting tour together, to Rajitha for the delicious refreshments and to everyone who came along adding to the pleasure of a fantastic day out.

Words by Linda, photos by Rajitha