Guess Who Went to Dinner?

Being a new member of the club, I have been looking forward to each possible event I could attend. The name “Guess Who’s Coming to Dinner?” appealed to my curious nature. It was a very simple and interestingly described event addressing the reason and rationale to support a charity organisation in its name. Groups of up to four could reserve their place by paying a very reasonable amount for a surprise dinner, and all with the privilege of having our dietary preferences catered for. The feeling that the money I pay is directly supporting a charity itself was the big incentive for me to go ahead and book this event. You can guess, then, that I wanted to share this enjoyment with three of the dearest people in my life. 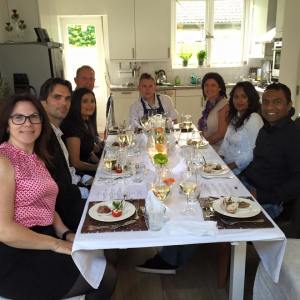 The game of guessing started right from the hour of reservation. The four of us had our minds wandering in four different directions. What if a celebrity is joining the event? Oh no…we are not aware of any famous names in Dutch television or film industry. Let’s Google them! Who is the mayor of Breda and surrounding places? Who is the best Dutch culinary chef? Is someone coming from a paparazzi or art background? Our minds only became still when we finally arrived on D-Day at hostess Angela’s beautiful home in Bavel.

It was an evening where ten people came together to get to know each other, share laughter and fun. We learnt a lot about how the charity works and how the money raised through these dinners help make the lives of others stronger. There was a four course menu, with four rich complementary wines, involving eight hours of preparation and five hours of celebrations that ended at midnight. Our menu and dietary preferences were smoothly taken care of with a personal touch.

Being from India I went with my partner who also from India. We were joined by two best buddies, one from Nepal and her spouse, a pure Dutchman. We enjoy Bollywood (Indian film industry with dances and dramas) music a lot.To our surprise, Angela’s spouse was very familiar with Bollywood music and needless to say it was a BINGO moment☺. After the last course of dinner the room slowly transformed from dining hall into dance floor where Angela showed us traditional dance from Scottish culture. Another group who had been enjoying a similar event at a neighbour’s house joined us for drinks and then began the Bollywood music with booty shakes banging the floor with super fun and joy.

You may be wondering who had stolen the show. Who was the icon of the guessing game after all? It was Mr. Mathijs Eggli – the Chef from Vis restaurant Ginneken. Mathijs

dedicated his whole day to preparing a delicious menu with carefully picked fish, vegetables, fruits, wines including all the small details. Angela was the sous-chef, pouring all her energy to mobilise the cooking and make our moments memorable. I hope this event raised a fair amount for the charity after the initial outlay for the dinner itself. Special thanks to Kriss who moderated the event.

All my best feelings and warm greetings to each one (including the people behind the scenes) who were involved in this event to make it wonderful. Wishing your selfless efforts to flourish in this world and help mankind.

The International Women's Club of Breda is a social club for ladies who have relocated to Breda, the Netherlands from their home countries, and those Dutch ladies who have lived abroad and returned home. We have approximately 80 members all ranging in age from our 20's to our 80's.
View all posts by IWC Breda →
This entry was posted in Charity, Events and tagged bollywood, charity, dancing, dinner, guess who's coming to dinner, vis restaurant ginneken. Bookmark the permalink.
%d bloggers like this: