After two years of intensive fund-raising led by our fabulous and highly-driven Angela Shaw, we were pleased to join her at the November coffee morning when she and Hope presented the head of Het Bonte Perdje, Mr Paul Mol, with € 3460.

Angela explained how an unfortunate horse-riding accident and subsequent rehabilitation programme had led her to Het Bonte Perdje.  The charity operates out of her local riding stables, Manege Rosenberg, where each Saturday morning, a group of handicapped youngsters are given the opportunity to sit on the back of the horse.  Horse-riding is an expensive hobby and one ill-afforded by parents who have many additional day-to-day costs to bear just raising a child with special needs. Het Bonte Perdje supports parents not only with the costs, but also offers them the gift of a moment of respite and seeing their child on horseback, which in turn helps the riders to develop their inner confidence and also physical strength.  Angela, who ran the risk of being confined to a wheelchair after her accident, was inspired by these children. Seeing them overcoming their own disabilities and gaining so much pleasure from being on horseback spurred her on with her own rehabilitation.

As a way of saying thank you, Angela nominated this worthy charity as the IWC charity for the club years 2013-2014 and 2014-2015. Once officially adopted by our members at the 2013 AGM, Angela set about organising a host of fund-raising activities for our members to enjoy.  Ably assisted (and some may say “abetted”) by Kriss Stallabrass, a whole host of activities were organised including a Burns supper, a Catalan evening, a Thanksgiving Dinner, an 80s disco and cake and book sales to name just a few.  We would also like to extend a huge vote of thanks to Hope, Nicole, Beatriz and Anna for their time and effort in organising these events.  And of course, a huge thanks to our members who gave so much in time (and talent) and for their generosity.

Needless to say, Paul was delighted with the funds raised and assured us all that they would be put to good and immediate use.  He also reiterated that IWC Breda members would always be welcome at the Manege Rosenberg on a Saturday morning.

Because of the time and money spent over the past two club years, we will not be supporting a new charity this club year.  We would, however, like members already to start thinking about a charity the club might like to support next year.  Proposals can be put forward at our AGM in September 2016, but we will give you more information about this nearer the time. 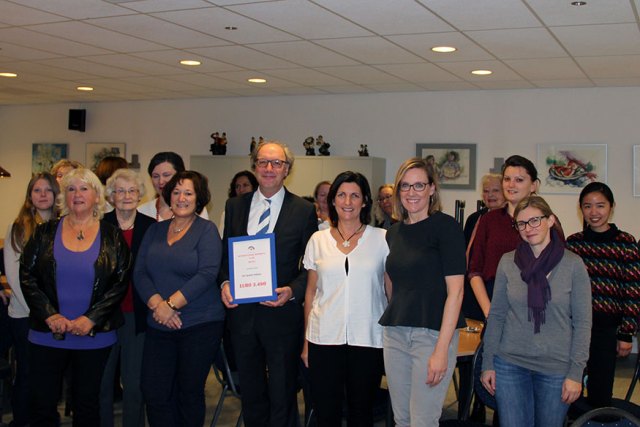 Sister Clubs in the Netherlands